Hilert Outen "Bubbles" Memorial Cup. "Bubbles," aka Hilert Outen, came to work on the farm with a load of horses from Camden, South Carolina at about age nineteen. A trick rider in his early years, Hilert performed any and every job necessary on the farm for nearly 52 years, until his death in 1981. Along the way, he shared an unparalleled sense of humor with everyone who knew him.

Zenas Colt / Fran Schneidau Memorial Cup. Zenas Colt led the Pittsfield Riding and Polo Association in Pittsfield, Massachusetts for many years, fielding polo teams featuring Herbie Pennell, Art Mason, and himself. An accomplished player carrying a four goal handicap at one time, Zenas' favorite rallying cry, “Cut him off at the pass," is an example of fundamental game strategy. Zenas' daughter, Fran Schneidau, worked as a stockbroker for 20 years before becoming a celebrated radio news journalist who covered and reported stories in Connecticut for 39 years.

Leigh Butterworth & Eckstrom Family Memorial Cup. Richard S."Dick" Eckstrom and his wife, Cynthia, lived in Mulberry Point in Guilford, CT. for 60 years. A decorated veteran of WWII and the Korean War, Dick was an all-around great gentleman who helped saw boards and cut board spacers (which he called "zingers") during the re-building of Giant Valley Farm in 1998. Cynthia was a graduate of RISD and, in addition to being an accomplished artist with a wonderful sense of humor, was a direct descendant of Thomas Norton, one of the original settlers of Guilford. Dick and Cynthia had three children: Leigh, Tom and Lis. Leigh was the inspiration for GVF Polo Club and her love, enthusiasm and support of the farm were exceptional. Tom rebuilt the entire farm after the 1998 fire and was an excellent all around builder and craftsman. Lis always applied her wonderful, insightful sense of humor to all of our endeavors until her passing a few years ago.

Big Feathers  Memorial Cup. Frank Butterworth Jr., a.k.a. "Big Feathers," managed Giant Valley Farm from about 1929 until his death in 1991. Frank began Giant Valley Farm as a dairy farm (including chickens, goats and horses) before transforming it into a horse farm, where he trained horses for polo. In 1954, he teamed up with the aforementioned Zenas Colt, Albert Marenholz, and Barclay Robinson as the Farmington Valley Polo Club team to win the National Twelve Goal Tournament. Frank Jr.'s nickname, “Big Feathers,” came from Johnny Kaiser, a former employee of Giant Valley South and former head man for Emilio Tagle in Florida.

Arvel Bryan  Memorial Cup. Arvel Bryan was the model of what a polo player should be. A native of Tulsa, Oklahama, he kept a few horses in his back yard, ran the Brook Grill and played polo for fun. An outgoing and generous man, Arvel started his son, Skip, in polo to carry on the tradition.

Albert Marenholz Memorial Cup. Albert Marenholz came back from World War II and B-29’s to work at Giant Valley Farm, were he did everything from make hay to train polo ponies. He eventually achieved a five goal handicap outdoors and a six goal handicap in the arena. He also coached the Yale University Polo Team successfully and won numerous polo tournaments both outdoors and in the arena.

Bill "Punchy" Phillips Amuseum of Polo Memorial Cup.  Punchy Phillips worked in polo for various players, including USPA chairman George Sherman (whom Punchy referred to as "El Presidente") and Big Feathers himself (a.k.a. Frank Butterworth, Jr.) at the first Gulfstream Polo Club in Delray Beach, FL. Punchy created the "Old Original Amuseum of Polo" in his modest home, which he referred to as "The Shack." This was the first attempt at a Hall Of Fame for Polo, albeit tongue in cheek.  Many polo luminaries visited for a good time to see, among other things, the Four Goal Poster Bed with the mounting block saying, "If Cecil Smith Had Been Tired, He Would Have Slept Here." Punchy was originally from Wilmington, Delaware and he also did publicity for the Brandywine Polo Assn. where he created the character "Winnie Neigh" (who had the legs of a horse) and Colonel Hitching Post, whom he drove around in an open model T Ford to promote Brandywine Polo. There was a line of cars a mile long at his funeral service attesting to his legions of friends. 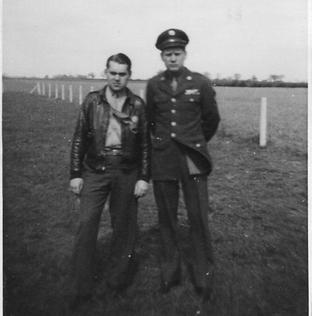 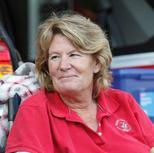 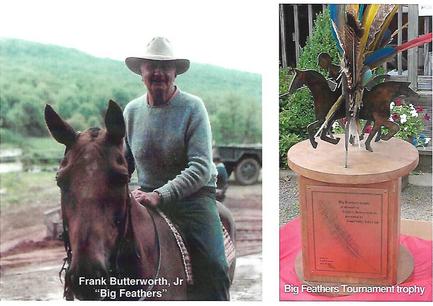 The Four Goal Poster Bed at The Old Original Amuseum of Polo. 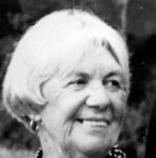 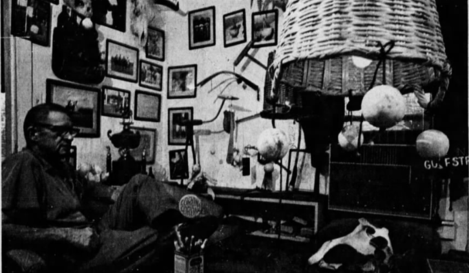 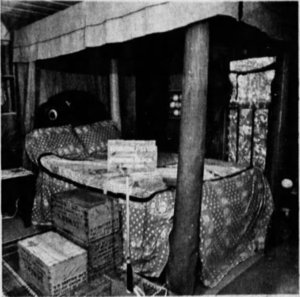 Photo courtesy of the American Air Museum in Britain

Call to confirm in the event of foul weather 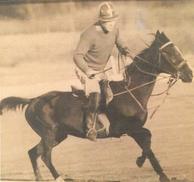 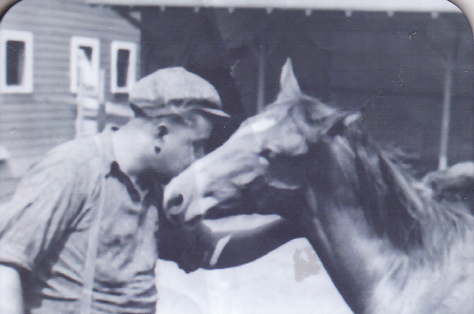 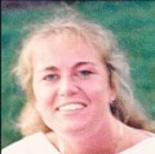 Bill "Punchy" Phillips at "The Shack." 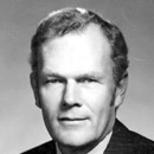