An example of an offside fore shot 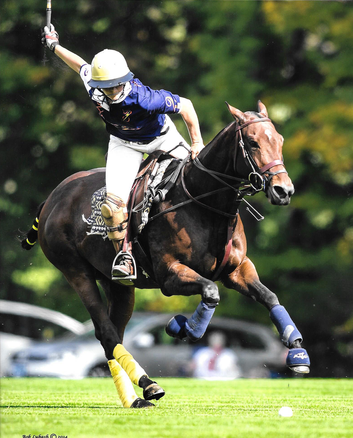 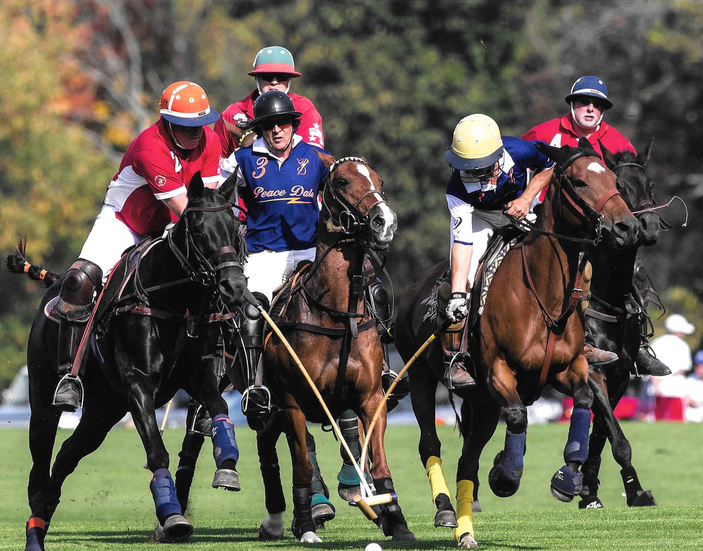 Call to confirm in the event of foul weather

BUMP - A player is permitted to ride into another player so as to spoil his shot. The angle of collision must be slight causing no more than a jar. The faster the horse travels, the smaller the angle must be.

CHUKKER - Also called a period. There are six chukkers in a polo game lasting seven minutes each. A bell will sound at 6 1/2 minutes as a warning. A horn will sound to end the chukker. If the score is tied at the end of the sixth chukker, a seventh period will be played until the first goal is scored. A player returns to each new chukker on a different horse, although he may rest one for a chukker or two and play him again.

FIELD - The ground is 300-yards long and 160-yards wide each with boards and 200-yards unboarded. The goal posts, which are collapsible on severe impact are 8-yards apart.

GOAL - Any time a ball crosses the line at any height between the goal posts it is considered a goal, regardless of whether a horse or mallet causes the ball to go through. In order to equalize wind and turf conditions, the teams change sides after every goal.

HANDICAP - All registered players are rated on a scale of -2 to 10. Over 90% of the players are 1 or 2 goal players. The world "goal" has no relation to the number of goals a player might score, only their ability. The handicap of the team is the sum total rating of its players and in handicap matches the team with the higher handicap gives the difference in ratings to the other team.

HOOK - A player may spoil another's shot by putting their mallet in the way of the striking players mallet. A cross hook occurs when the player reaches over their opponent's mount in an attempt to hook (this is considered a foul).

KNOCK-IN - Should a team, in offensive drive, hit the ball across the opponent's backline, the defending team resumes the game with a free hit from their backline. No time-out is allowed for knock-in's.

MALLET - Also known as a "stick". The shaft is made from bamboo shoot and the head from either the bamboo root or a hard wood such as maple. These vary in length and are very flexible.

NEAR SIDE - The left-hand side of the horse

NECK SHOT - A ball which is hit under a horse's neck from either side.

OFF SIDE - The right-hand side of the horse

OUT OF BOUNDS - When a ball crosses the sideline, it is considered out-of-bounds and the umpire throws in another ball between the two teams at that point. No time-out is allowed for an out-of-bounds ball.

PENALTY - A free hit toward the goal from a set distance. The severity of the foul committed determines what penalty will be awarded.

PONIES - The best polo ponies are of Thoroughbred blood whose main qualities are heart, speed, wind, stamina, and the ability to accelerate, stop and turn quickly; and whose temperament is amendable to the rigors of the game. There is no height limit for the horses, although most are between 15 and 15.3 hands. The age of the pony pony is generally between 5 and 15 years. Players concede the pony accounts for up to 75% of the game.

POSITIONS - Each of the four team members plays a distinctly different position. The players may momentarily change positions but will try and return to their original assignment. Number 1 is the most offensive player, Number 2 is just as offensive but plays deeper. Number 3 is the pivot player between offense and defense and tries to turn all plays to offense, and Number 4 (the Back) is the defensive player whose role is principally to protect the goal.

RIDE-OFF - This occurs when two riders make contact and attempt to push each other off the line of the ball so as to prevent the other from striking.

SUDDEN DEATH - In the event of a tie score at the end of the final chukker, there is a five minute intermission to allow the players to catch their breath and change to a fresh mount before beginning a "sudden death" chukker in which the first team to score wins the match.

TAILSHOT - Hitting the ball behind and across the horses rump.

THIRD MAN - The referee sitting at the sidelines is the third man. If and when the two umpires on the field are in disagreement, the third man makes the final decision.

THROW-IN - A chukker begins and many players resume with the umpire bowling the ball between the two ready teams.

TIME-OUT - An umpire calls time-out when a foul is committed, an accident occurs, or at his own discretion. A player may only ask for a time-out if he has broken tack or is injured. No time-out is allowed for changing horses or replacing a broken mallet, although a player may do so at any time.

UMPIRES - Two mounted umpires (one for each side of the field) consult each other after each infringement and impose a penalty only if they agree. If they do not agree they ride to the sidelines to confer with the third man, known as the referee.